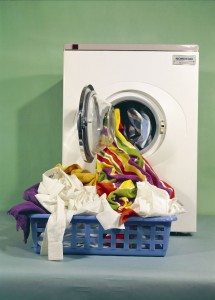 Laundry can be an unexpected financial burden on students. At Defiance College it cost $2.50 to complete just one load of laundry, which might mean picking between a clean shirt and spending the night out.

If a student does their laundry twice a month then they will find themselves paying $10 a month, which adds up to $90 over the school year; not including the cost of detergents, fabric softener, dryer sheets and other laundry essentials. Of course, depending on how often you do your laundry, you can easily find yourself paying more than $150 on laundry by the end of the school year.

END_OF_DOCUMENT_TOKEN_TO_BE_REPLACED

Lights. Camera. Action. It might seem a little cliché, but Thor: The Dark World, which premiered on November 8, followed that exact guideline. The lights dimmed, and the trademark comic page turning intro of Marvel began. Action hungry audience members only needed to wait two minutes, before the sci-fi action associated with the Thor universe began.

Thor: The Dark World follows the continuing saga of the hero Thor and was well worth the two year wait. Though the movie revolves around the story of Thor, there are numerous references to the events from The Avengers as well as the first Thor movie, displaying a core story line that will most likely be represented in all upcoming Marvel movies. Although Thor is the main character and protagonist in the movie, keep your eye out for one or two super hero cameos.

Enjoyment of Thor: The Dark World id not dependent upon previous knowledge. Viewers who haven’t seen the first Thor movie, or The Avengers, will not be lost. They may feel left out of a few funny one liners, but the storyline is essentially new, allowing anybody to dive right in to the Marvel Universe.

Under the direction of Alan Taylor, Thor: The Dark World paints a darker, post Avengers universe. Unlike previous Marvel movies, there are no hints as to who will die, who will live or even if the hero will succeed. Taylor excels at manipulating the audience’s knowledge of key characters, using them to present multiple possibilities from the struggles in the movie. Both veteran comic book readers and regular movie goers will be blown away by the truly unexpected plot twists.

Though the movie may present a darker mood, there are still plenty of one liners and comedic scenes. Throughout the movie you may find yourself on the edge of your seat, biting your nails before being reassured everything is alright. By the time the end credits role you won’t be able to decide whether the fight scenes or the comedic aspects of the movie were better.

Whether you are an avid comic book fan or just enjoy going to see superhero movies, Thor: The Dark World is a truly enjoyable addition to theaters across America. It will make you jump in surprise, laugh and wish there was no end in sight. So grab your friends, your spare change, and buy yourself a ticket to go see Thor: The Dark World. Oh, and make sure you don’t get fooled into leaving halfway through the credits

Now that the first few weeks of the semester have settled in so have the home sick jitters. College campuses across America experience mass migrations of local students going back to their homes, leaving an empty campus for those individuals who do not have the luxury to go home for a day or two.  Defiance College, despite the size, is one of those many colleges that becomes largely empty on the weekends.

END_OF_DOCUMENT_TOKEN_TO_BE_REPLACED

“All right! College has started and now it’s time to have fun! Oh shoot, I also have to pay debt. Dang it!” Paying debt is not fun, or at least not in real life. However, there is a game in which you have to pay debt in order to have a nice house in a life simulation game called Animal Crossing: New Leaf.  In this game, you are a human living in a village with anthropomorphic villagers (animal like humans).  In this life simulator game, you have the freedom to do whatever you want. You can fish, fossil hunt, catch bugs, buy clothes, and buy furniture for your new house (that you have to pay debt for).  Why is this game so popular?  Let us go back to the first game of the series.

END_OF_DOCUMENT_TOKEN_TO_BE_REPLACED

Refs, players, and finally a marching band. The first home football game against Adrian on Saturday saw the completion of the football program with the introduction of the first ever Yellow Jacket Marching Band.  The first performance of the marching band had been anticipated since Bridget Leahy was announced as the director of bands last year academic year.  Since then the community and the school has rallied support to provide uniforms, instruments, and staff members.