This season, the Women’s Golf team faces what some people might consider a 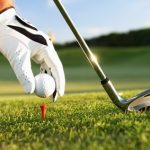 setback–the number of players on the roster.

The Women’s Golf team consists of just two members; Shelby Mercer and Maricella Najar. Mercer is a Sophomore and Najar is a freshman.

DC’s roster number can be discouraging at times, but with a positive attitude and hard work, Najar and Mercer are determined to make this Fall season a season to remember.

The members of the golf team have been working together to compete at a high level despite the talent and numbers that are present in the Heartland Collegiate Athletic Conference (HCAC).

All of the Yellow Jacket’s competitors in the HCAC all roster five or more members to a team. With the decrease in rostered players for DC, the team realizes just how important it is to stay focus and determined. Keeping a positive mindset going into practice and matches is key for the program.

According to Mercer, the Yellow Jacket’s season is going well. Practices are the best for getting more work in on fixing their swings, correcting their grip and posture, improving ball control, and perfecting putting and chipping.

These practices allow them to encourage one another to keep pushing to reach their goals. Practices put the focus on each member’s strengths and weaknesses. By determining those and working hard to improve them, the Yellow Jackets grow together as a team.

“The season is going well. I have had some amazing shots and every time I play, I just keep getting better.” Mercer remarks.

As the season continues on, Najar and Mercer maintain their focus, determination, and competitiveness. The team has big plans for their upcoming matches as they approach the end of the Fall season.

By far, the Yellow Jackets are most determined to beat conference rivals, Bluffton.

According to Mercer, the Women’s Golf rivalry between Defiance and Bluffton runs deep. “I take rivals seriously so I make sure I play my very best going up against them.”  The team wishes to outscore Bluffton and overtake the Beaver’s standings within the HCAC.

Like any team in the HCAC, the Yellow Jackets wish to finish at the top of the conference this season. According to the HCAC Women’s Golf Standings, Mount St. Joseph University Lions (Cincinnati, OH) is top of the pack, holding the first place spot.

Following behind the Lions, is Anderson University (Anderson, IN), Hanover College (Hanover, IN), Franklin College (Franklin, IN), and Manchester University (Manchester, IN).

DC’s rival, Bluffton sits one spot ahead of the Yellow Jackets, ranking seventh overall. The Yellow Jackets are determined to bump their standing prior to the offseason and tournament action.

Working hard day in and day out, constantly pushing themselves to better their swings, and dedicating themselves during practice and matches, the Women’s Golf team strives towards excellence.

For additional information on the men’s or women’s golf team, contact Coach Allen Curtiss at (c) 419-956-7055 or acurtiss@defiance.edu