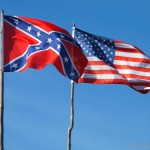 Flags are enduring symbols of our history and should never be utilized without recognizing what they truly represent.  The US flag clearly represents the growth of our united states from the original thirteen colonies due to the bloody sacrifices made to establish and maintain “the union”.  My own namesake came to the American colonies from Switzerland in 1740 and his eldest son (Adam) fought (as a lowly private) throughout the Revolutionary war. Adam Rickabaugh risked his life, and my future existence, to create our nation and to reject the tyranny of a colonial power.

The road to the US Civil War was long and complex but it was based largely upon improving human rights and the need for states to work together to grow as a unified democratic society. We were not a perfect union regarding freedom.  Some slave labor was used to build the White House and various US Presidents brought their personal slaves to serve them as White House staff.  By 1861 our country was clearly divided over the human rights issue of a “slave-based economy”.  During the ensuing four-year blood bath the Buckeye State provided over 300,000 soldiers (third behind New York and Pennsylvania) and more than 3,500 of them died to re-unite “the union”.

The “Confederate Battle Flag” was a symbol of national disunity and the inherently evil dependency on the institution of slavery to maintain economic power, wealth, and white supremacy. In fact, the second version of the CSA flag (The Stainless Banner) contained a large white background to symbolize the “supremacy of white men”. Despite the eventual surrender of the Confederacy and reunification of the United States, the Confederate Battle Flag lives on as a symbol of disunity, discrimination, and anti-government sentiment.

During World War II selected military units were allowed to embrace the Confederate Battle Flag as their unofficial emblem and the USS Columbia flew a Confederate Navy Ensign as a battle flag throughout combat in the South Pacific.  As a young man I viewed this symbol frequently on TV shows such as the “Duke of Hazard” and on “Lynyrd Skynyrd” album covers.  Since that time, the usage of the Confederate Battle Flag has become a much more serious and controversial symbol.  Despite this growing controversy, a 2011 Pew Research poll revealed that only 30% of respondents had a “negative reaction” to the symbol while a majority (58%) had no reaction at all.  Ironically, only 44% of respondents viewed the flag as an obvious symbol of racism.

I recognize the great sacrifices that Confederate soldiers and citizens made during the US Civil War, but I do not feel that they were fighting for noble causes.  Many people today feel that the US Civil War was purely economic in nature, but when the South’s economy was based upon the blood-stained backs of slaves I find that to be an overly simplistic and misguided notion. I also recognize that many individuals currently embrace the Confederate Battle Flag as a symbol of their resistance to “over-governance”.  However, I find it ironic that these same individuals demand the benefits of free public schools, tax supported infrastructure to provide roads, sewers, and drinking water, and numerous government programs to provide individual opportunity and growth within a democratic society.

Any person flying or posting the Confederate Battle Flag should consider all the messages that you are potentially sending.  More specifically, as a resident of Ohio, I feel that you are disrespecting the sacrifices of our forefathers who fought to establish and maintain the unity of our country.  If those of you posting the Confederate Battle Flag want to express your attitudes more specifically, I suggest that you purchase bumper stickers.  Some that come to mind are, “Racist and proud of it!”, or “Victim of my own apathy!”

It’s time for all of us to move on and reject the Confederate Battle Flag.