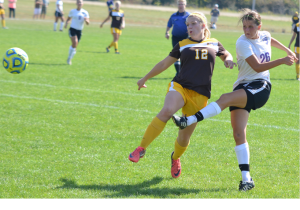 Junior Lindsey Bubnick shoots to score her second goal of the match.

In the first half both teams played composed defense and looked very even. Baldwin Wallace opened the scoring the first half with a goal from 25 yards out at about the 30 minute mark.  Defiance down a goal, they looked to regroup at half time.

The second half began and Baldwin Wallace scored 3 unanswered goals in the first 9 minutes of play, putting Defiance down 4 – 0.  When all hope looked lost, the Defiance College Lady Yellow Jackets found themselves a scoring streak.

With about 20 minutes left out of the 90, Junior Lindsey Bubnick found the back of the net.  Bubnick continued to lead the team by scoring her second goal two minutes later and stealing the ball in the middle of the pitch which lead to the third goal by Junior Meagan Redick.

With the score at 4-3 the Defiance Lady Jackets looked to find the fourth goal, but just fell short.  Having several late game opportunities, the ladies were just unable to put them away.

Baldwin Wallace took 31 shots and put 20 on frame compared to Defiance taking 8 shots and putting 7 on frame.  With great goal keeping by Claire Turner, who saved 13 of the 17 goals on frame, and finishing led by Lindsey Bubnick, Defiance made what looked like a blow out into an exciting ending.

The Defiance College Lady Jackets open up the conference tournament with a game against Mount Saint Joseph next Saturday October 5 at 1:00 pm.