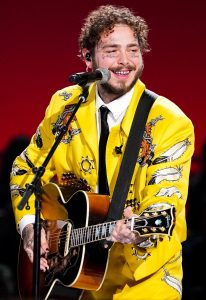 Post Malone is undoubtedly one of the most popular and successful musicians of our generation. His music has topped the Billboard charts the past three years with hit singles playing consistently on the radio and streaming services. On September 6th, 2019, Post dropped his third studio album, Hollywood’s Bleeding. The collection features 17 songs, comparable to his other records.

Arguably, Hollywood’s Bleeding is his best work thus far. On this album, we get a “softer” version of his music. Post’s vocals range from his traditional raspy tone, a softer pitch, and a smoky howling voice. With the diversity in his vocals, changing from song to song makes the form of the album more attractive to fans. Post also has begun to use a soprano in a few tracks like “Allergic” and “A Thousand Bad Times.” “Allergic” features some alternative rock influences, similar to songs written and produced in the early 2000s, helping it to stand out from traditional-sounding Posty creations.

The album opens with the title track “Hollywood’s Bleeding.” The song discusses how rough the Hollywood lifestyle can be and offers us an insight into how Post feels about his lifestyle and the world around us. Other tracks like “Internet” provide us with insight into how Post thinks about how the internet has impacted our daily lives.

Other tracks like “Circles,” “Goodbyes (Feat. Young Thug), and “A Thousand Bad Times” discuss everyday challenges. The chill vibes of the tracks, from Hollywood’s Bleeding, are expected to be fan favorites.
Hollywood’s Bleeding also features an astronomical number of celebrity features including SZA, Meek Mill, Young Thug, Halsey, DaBaby, Travis Scott and even Ozzy Osbourne. Coming as a shock to most fans, Ozzy Osbourne is by far the most unique of the collaborations. Osbourne was Black Sabbath’s lead singer in the ’70s.

Osbourne and Scott are both features on “Take What You Want.” This track discusses wanting to be released by a toxic relationship. The mixture of artists on this track makes it one of Post’s most unique and different sounding songs.

The range of his vocals, diversity in the album’s features, and range of beats and influences make it stand out from his other work.

Post also has a specialty line of Crocs and runs a music festival, PostyFest.