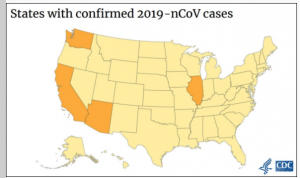 the United States, according to the Center for Disease Control and Prevention (CDC).

Students around campus have mixed levels of concerns about the danger of the virus and anxieties about its contagiousness.

When asked if they were worried about the virus, one student announced, “Nah. [The virus is] overhyped”.

According to the CDC, “This is a very serious public health threat. The fact that this virus has caused severe illness and sustained person-to-person spread in China is concerning, but it’s unclear how the situation in the United States will unfold at this time.”

Morgan Beaverson stated that she was “Not really [worried]. It’s getting a lot of attention, but its death rate isn’t that high”.

Currently, the CDC has confirmed 6 people who have contracted the coronavirus in the U.S., with 121 cases pending results. No one in the United States has died yet.

The virus is a new disease not previously known to be found in humans. It was first discovered in China, where thousands are now infected. The virus is spread from person to person but was initially found only in animals with the rare case of the disease spreading from animal to person.

Jessica Lynt states, “I mean, to be honest, I am a little worried because of how fast it is spreading, but I think as long as no one does anything dumb, and we all take good precautions toward not getting sick, we’ll be fine.”

For those concerned about the virus, there are recommended precautions that can be taken. The Defiance County Health Department’s website states to prevent the spread of diseases, like the coronavirus, is to wash hands, avoid touching face, nose, and mouth, avoid sick people, stay home if sick, and always to cover your nose and mouth when sneezing.

Another student said, “I’m not super worried about right now, but if there happen to be more cases, especially close to the U.S., then I will be more worried.”

More information about the virus can be found at https://www.cdc.gov/coronavirus/2019-ncov/index.html or contact your local health care provider.