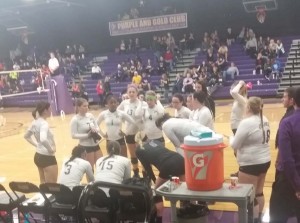 With the win the Yellow Jackets improved their record to 15-10 and remained undefeated in the HCAC with a 6-0 mark and dropped the Panthers of Hanover to 13-14 overall and 4-2 in the HCAC.

The Yellow Jackets took control of the match early led by Senior Bree Anderson with a big kill for the first point, her first of seventeen kills on the day.

END_OF_DOCUMENT_TOKEN_TO_BE_REPLACED 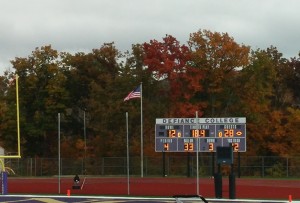 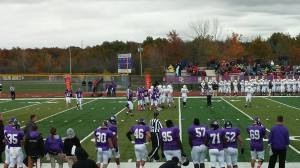 Both the offense and defense of the Yellow Jackets put up strong stats throughout the game. The offense stacked up seven plays for over 10 yards and two plays for over 20 yards. They also were 2/2 in the redzone and had 17 first downs.

The defense was able to make 9 stops on third down and also made a couple of stops on fourth down,giving the ball back to the offense. They racked up seven tackles for a loss and three sacs.

In the second quarter Defiance strikes first after Garrett Teague runs it in on the goal line. The score was set up by a fourth down conversion and two completions from Alex Larson to Cody Wilson which covered nearly 50 yards, Defiance would lead 6-0.

END_OF_DOCUMENT_TOKEN_TO_BE_REPLACED

(Defiance, Oh) Residents of McReynolds Hall will be hearing the sounds of construction once again during the school year. In an interview with Sammi Stevens, McReynolds Hall Director, there was much information shared regarding the renovations.

The renovations started once again during the week of September 22. The process has started off slow because of other campus projects, but the hope is the pace will pick up later. The renovations have started on the second floor in the south wing, with two rooms being renovated at a time.

END_OF_DOCUMENT_TOKEN_TO_BE_REPLACED

Now let’s introduce Yik Yak, Yik Yak is a completely anonymous app. It has become the new big thing on the East and West Coast, the Yik Yak Company is even touring all down the East Coast with their mascot in tow.

END_OF_DOCUMENT_TOKEN_TO_BE_REPLACED

Looking back at last winter, from the most accurate resource, Toledo saw 84.8 inches of snowfall, making it was the snowiest winter in Toledo’s history! It was the 5th coldest winter in Toledo history, with an average temperature of 20.4 degrees fahrenheit.

END_OF_DOCUMENT_TOKEN_TO_BE_REPLACED

(Defiance, Oh) Attention Defiance College students, faculty and staff: don’t forget to save the time and date of 7:00 p.m. on October 15th. Be sure to sure to write it in your planners and mark it on your Google calendars.

On this special day, the dress rehearsal for the musical performance Les Mis, starring many faces on campus, will be the only night where college students, faculty and staff get free admission if you bring your Defiance College ID. The musical is performed at the community auditorium in the Defiance Junior High School located at 629 Arabella St., right off of South Clinton St.